You need lifting expertise working for you, with equipment that will perform so that your operation continues safely and effectively.

EVERY LIFT USES 1 OF 3 BASIC HITCHES

Vertical, or straight, attachment is simply using a sling to connect a lifting hook to a load. Full-rated lifting capacity of the sling may be utilized, but must not be exceeded.

A tagline should be used to prevent load rotation which may damage the sling. When two or more slings are attached to the same lifting hook, the total hitch becomes, in effect, a lifting bridle, and the load is distributed equally among the individual slings.

Choker hitches reduce the lifting capability of a sling, since this method of rigging affects the ability of sling components to adjust during the lift. A choker is used when the load will not be seriously damaged by the sling body - or the sling damaged by the load, and when the lift requires the sling to snug up against the load. The diameter of the bend where the sling contacts the load should keep the point of choke against the sling BODY — never against a splice or the base of the sling eye. When a choke is used at an angle of less than 120° the sling rated capacity must be adjusted downward.

Basket hitches distribute a load equally between the two legs of a sling, within limitations described below. Capacity of a sling used in a basket is affected by the bend, or curvature, where the sling body comes into contact with the load, just as any wire rope is affected and limited by bending actions, as over a sheave.

When a choker hitch is drawn tight at an angle of less than 120°, the capacity must be downrated by the percentage indicated in the Rated Capacity table below. In controlled tests, where the angle was less than 120°, the sling body always failed at the point of choke when pulled to destruction. Allowance for this phenomenon must be made anytime a choker hitch is used to shift, turn, or control a load, and also when the pull is against the choker in a multi-leg lift.

Get equipment fixed right the first time with our hoist and hydraulic pump refurbish services.

Balance budgets and regulations with our OSHA compliance consulting.

Throughout the year we’ll be marking the occasion by saying “Thank You” with great events, giveaways, offers, and promotions. Learn More... 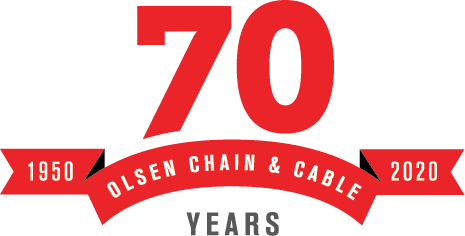 this icon is currently hidden